In art history, the paramount importance of the representation of space in works of art has always been recognized. From 19th-century landscape paintings by artists such as Constable, Courbet, Seurat, Turner, and Van Gogh, to the impressionist movement (Cézanne and his Montagne Sainte-Victoire), to cubism, in which space is so diffracted as to result in abstraction, opening the canvas to infinite perspective–over the centuries, space has remained a major object of research in pictorial representation. In the mid-20th century, that very concept of space shifted from being an object of representation to a subject of presentation. Indeed, a new art form emerged with the practice of installations by artists such as Jean Dubuffet, Louise Bourgeois, and Bruce Nauman. For the artist, the idea was to permeate the space directly, with spectators being invited to advance through the space, undergoing an experience that appeals to all the senses, not just sight. The art critic Catherine Millet thus stresses that “We no longer enter the landscape; rather, it pervades our living space” (art press, No. 45). The space merges with the work of art. As a result, art and space maintain an inherently vital relationship, as the one makes the other possible. 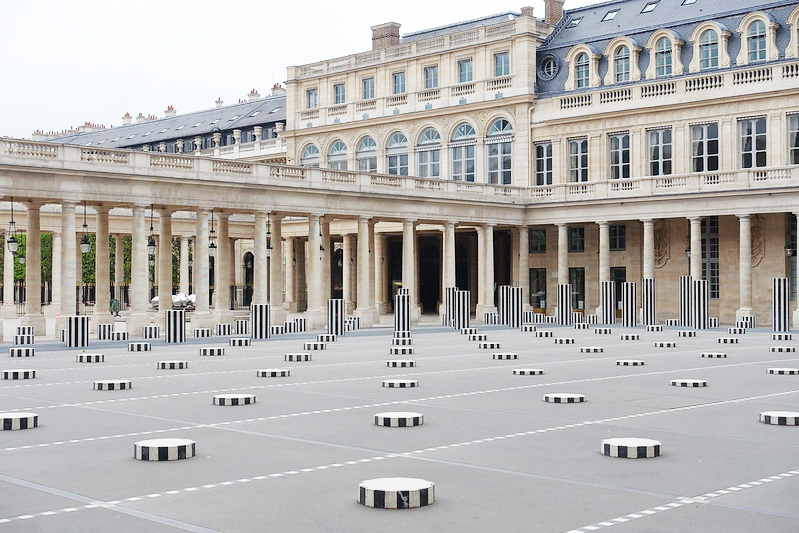 Eager for space, then, art has gradually pervaded various public spaces, including, notably, in cityscapes. In 1986, the contemporary artist Daniel Buren designed Les Deux Plateaux, more commonly known as “Les Colonnes de Buren,” for the inner courtyard of the Palais-Royal in Paris, just steps from the Ministry of Culture and the Comédie Française. This work of art, which consists of 260 truncated white marble columns with 3.4 in-wide, black and white stripes, covers over 32,000 square feet.

This gradually established relationship is manifested in a virtuous circle and a constant dialogue between the two sides of the equation. Indeed, when art pervades space, space is thebetter for it: enhanced, enlivened, magnified. The visual experience of the modified space, accompanied by the active integration of the spectator in the process of viewing or interpreting the work of art, lends the place a new dimension, in terms of its aesthetics and meaning alike. It was thus that, upon viewing the Buren columns, the writer Roger Peyrefitte declared: “Having arrived at the Palais-Royal, I instantly felt emotional upon viewing that representation of ‘ancient ruins’ adding warmth to the cold setting and, happily, replacing government officials’ parked cars. These columns, or sections of columns, evoked for me the remains of the portico at the Acropolis of Pergamon.”

Art magnifies space by stirring the collective unconscious and making a concept of beauty sing in every nook and cranny. Etymologically, the French word for real estate, immobilier, meaning “a property or object that cannot be moved” (its Latin root, im-mobilis, being the negation of the Latin adjective mobilis, meaning “able to be moved or shifted”), logically follows this line of reasoning. Indeed, a property that cannot be moved is, by definition, permanently merged with the space it occupies. Real estate construction, whether designed for residential, office, or sales purposes, invites art much the same way as cities or public places, albeit on a different scale; and the same beneficial effects can be observed in a thoughtful look at the site itself. 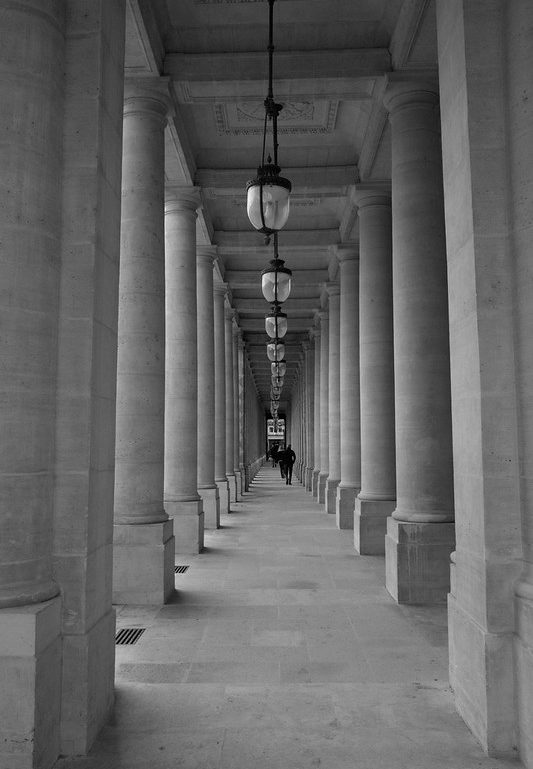 These days, observations aimed at demonstrating the “pluses” that art can bring to the design of a space are no longer expressed in the conditional. Indeed, a confluence of societal phenomena are making the presence of art more of a necessity. First, individuals, having become accustomed to and nourished by the increasingly visible involvement of art in spaces, have much higher expectations. A space devoid of art can appear unfinished: almost in spite of itself, the eye will seek out some artistic imprint. As the artist Robert Filliou said, “art is what makes life more interesting than art.”

Moreover, our contemporary society is displacing the domain of privacy and the personal sphere, which are spilling into everyday life. Thus, art acts to bind a trivial moment in one’s day to a specific, personal lived experience. This explains the growing interest in art among companies in industries as varied as insurance, banking, and real estate promotion, the latter of which sometimes includes genuine artistic journeys within projects, taking a more personalized approach with clients.

Finally, given the numerous stimuli to which we are exposed daily, the individual is no longer satisfied with passing through spaces, but instead is in search of an experience. An appeal must be made to the individual, and that is precisely what a work of art is intended to do, in that art is unfinished until it is in contact with the viewer, whose active contemplation completes it. As the art historian Liliane Brion-Guerry explains, “The modern work of art thus establishes a primary form of systematic participation; the observer ‘is, in a sense, called upon to collaborate in the artist’s work’, becoming its ‘co-creator’.”

Increasingly, then, the paths of art and real estate are crossing. The current importance of cross-disciplinary collaboration is leading promoters, artists’ agents, architects, interior decorators, and landscape designers to work together, creating exceptional spaces that are in line with social changes and individual expectations. The 21st century may well be the moment when art achieves its greatest distinction and when real estate, which touches everyone, becomes one of art’s main platforms.